We would like to welcome Dr Onn Tin Shaw to OMBC with a 110cm fish he caught in front of his house! We first received a letter from Triston Shaw whom submitted his father Onn’s fish to OMBC. Triston told us about the catch and we could not wait to hear from his dad to get all the details.
Onn tells us he was fishing at 6.30 am on April 20th this year directly in front of his residence at Trinity Beach. He said ” I was not especially targeting Barras, although I have caught several of them here before. I was standing on the beach and cast my quarter piece of prawn out 10 metres and ended up landing a 110cm – 17kg Barramundi”. He later added ” My weakest link was a Daiichi size 16 hook which is about 2.0 attached to my John Howard Samurai 15-25lb rod and Diawa Z2000 reel loaded with 30 lb braid. The leader was 50 lb mono”. Onn explained that during the fight a crowd of onlookers gathered and were treated to a spectacular show as the fish jumped several times. As Onn Tin told me it is reassuring that it is still possible to catch a trophy fish 20 km from Cairns on the northern beaches and we strongly agree! Onn is actually getting this fish cast and a mount made for his house. Hopefully not too many that witnessed the catch will give away the spot. Two of Onn’s fishing companions George and Evelyn are sworn to secrecy and know better than to bite the hand that feeds them. While George loves to dive and retrieve fish,Evelyn much prefers to dig for crabs but both will sit patiently for hours as Onn fishes. So what is better than an angler happily holding a metre plus barramundi? Adding one of mans best friend into the picture we reckon. Meet George the Golden Labrador who as you see is as happy as a pig in muck with the capture. Well done Onn Tin and again welcome to One Metre Barra Club. 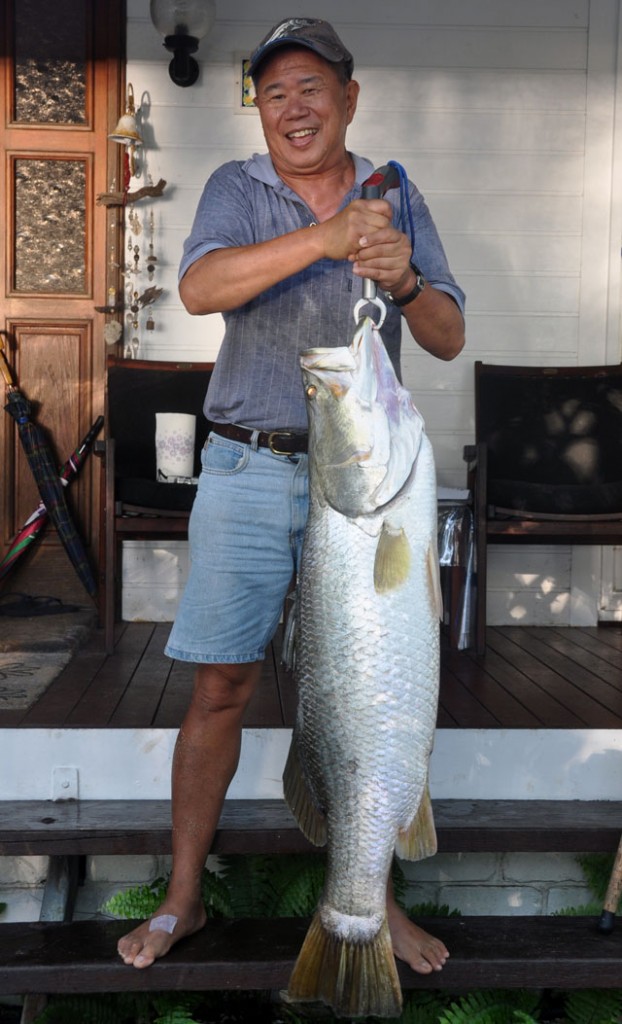