We would like to welcome our newest member Adrian Wayne to One Metre Barra Club with a fish of 122cm. Adrian was fishing with family and his son Nate at Conway Beach when this barramundi boofed his live mullet. Adrian tells us that tide was coming in when he hooked up. He landed it on a Shimano Shara Rod teamed with a 4000 Bait Runner loaded with 30 Lb Fins Braid. Adrian released this fish once he got a couple of pictures.  Again welcome to OMBC. Adrian we hope you and Nate get to experience more fishing like this in the future! 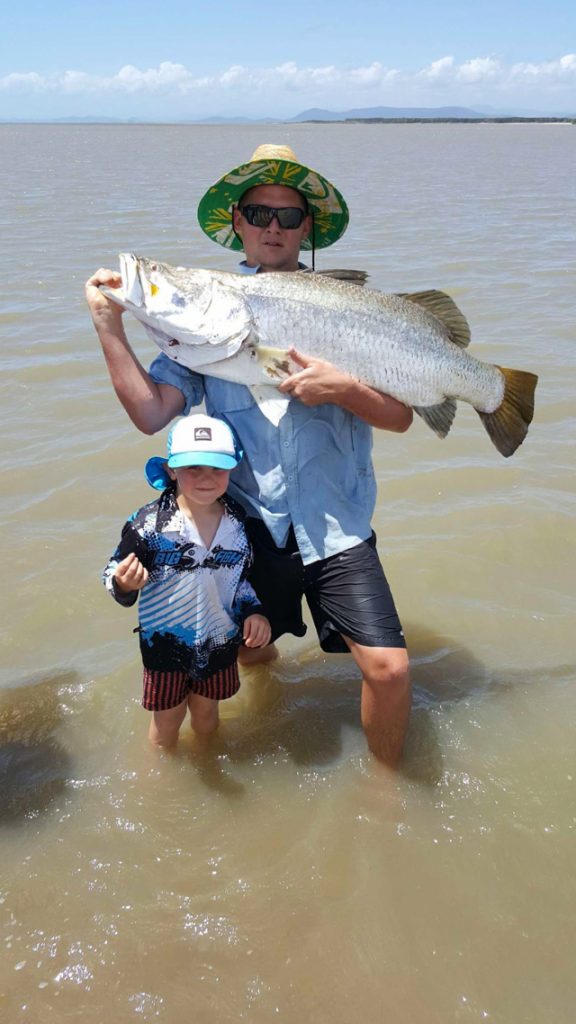 Well do we have a story for you on this one! We would would like to welcome Dan Summerfield to One Metre Barra Club with this beautiful 126cm fish. Now to tell the tale of how this ripper was caught I’m going to throw it to Dan so you hear it straight from the horses mouth so to speak.
“I caught her with a live 75mm Poddy mullet float fished in 1m of water.  The mullet got hit by a 20cm Tarpon the instant it hit the water and then in turn it got smashed by the monster Barra. 15 mins of mayhem followed as she shook her head, dived for the snags and tail walked.
As she began to tire I then had to find a way to land her as the river bank had a 3m sheer drop at low tide. The landing net was long enough but not big enough so I tied a rope to my tow ball hitch of my vehicle and kind of abseiled on down the bank with lip grips attached to another rope in my other hand. At this point I didn’t want to hang around with all the local Salties (crocodiles) alerted to a free meal but I reassured myself with the fact that there was a metre plus Barra between me and impending doom!  I managed to haul her and myself to safety much to my delight!
A few photo’s later, a quick one on the brag mat and she was back in the water to spawn another day.. Joy!”

What a great fishing story Dan. Congratulations on your catch and effort and welcome to One Metre Barra Club! 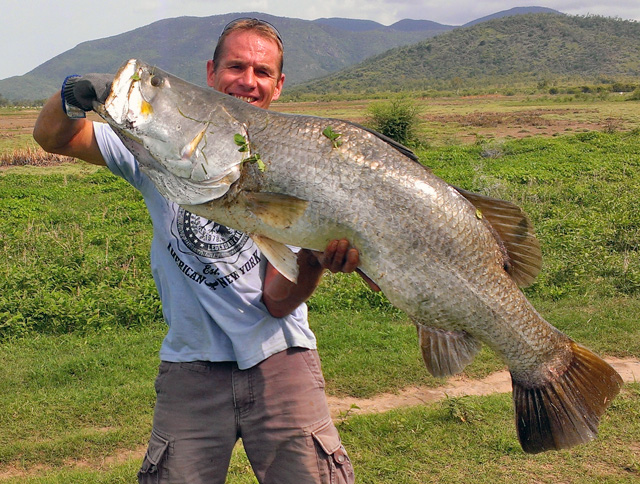