We would like to welcome another new member to One Metre Barra Club. Scott Waine just reported this 110cm Barramundi from the Roper River in the Northern Territory. Scott was trolling a Warlock 2.5 lure on a Daiwa Zillion and G Lommis outfit when this fish latched on.
This was Scotts first trip in his new boat and although he has lived in the territory a couple of times it has taken a couple of years to crack the metre mark. He is crediting the luck to his new ride and the gold Warlock lure which has been his go to weapon for Barra and Saratoga. The fish was caught in 22 degree water on a crisp day for the NT. He was trolling the banks in full sun expecting the fish to be looking for extra warmth. Scott tells us that although it was cold the fish was hot and showed no signs of being a lazy slob. The fish took off he said and launched fully out of the water. When his mate Max netted it went berserk and destroyed the net.
Well Scott hot luck in a cold patch! Welcome to OMBC mate. 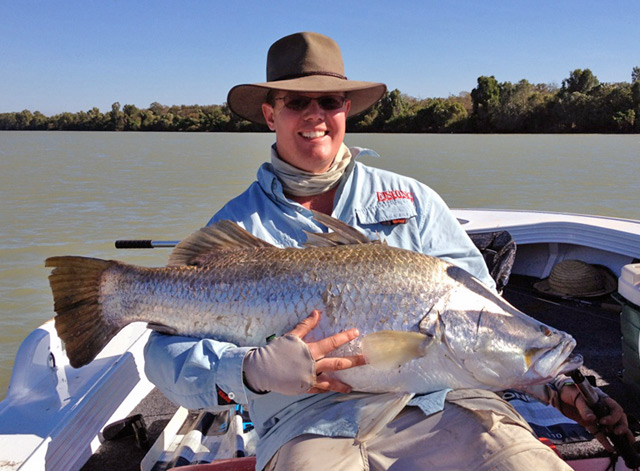