Welcome Keiron Connoly  O’Connor to One Metre Barra Club! Fishing with Guide Paul Dolan of Mackay Fly and Sportfishing he landed this 110cm Barramundi using a Zerek Fish Trap in the Fat Betty Color Keiron had never caught a Barra before and now he has a 110cm under his belt.  Well done Keiron and welcome to OMBC! 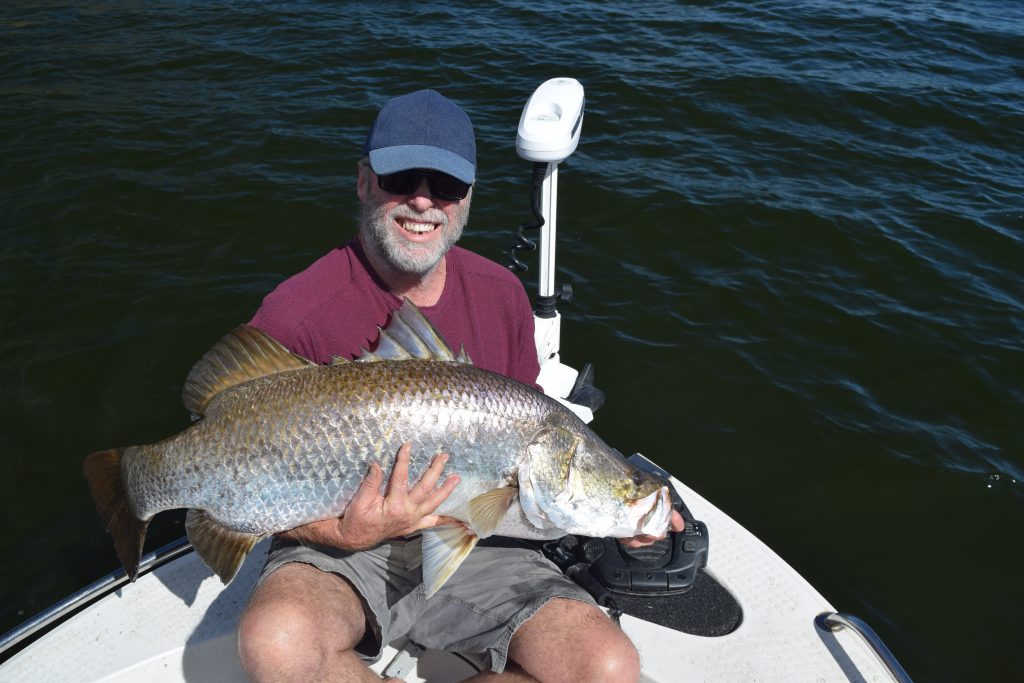 We would like to welcome David Bax to One Metre Barra Club with this 100cm fish. On the 15th of January he caught the metre barramundi on the Daly River with fishing guide Shannon “Mousie” Latham. You can contact him on  0488 770 073  Tackle used was a bait caster outfit with red soft plastic lure. You can check that out on the deck! Congratulations David and welcome to OMBC. 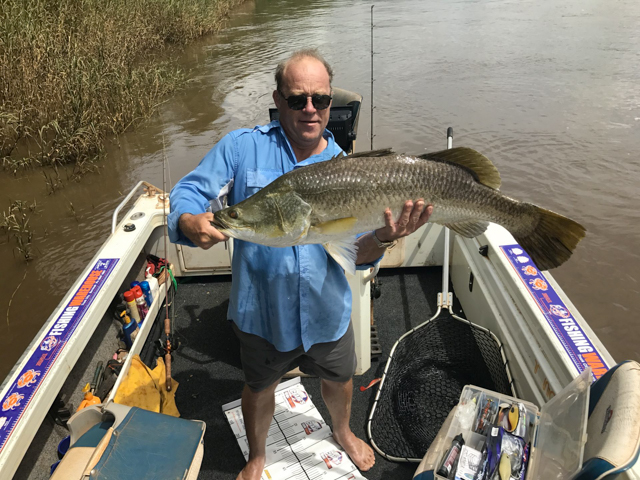 We would like to welcome  Peter Bartho to One Metre Barra club with this impressive 110cm fish he caught at Port Headland, Western Australia.  A live mullet was not passed up by this fish and Peter used a G-loomis Gl2 with 30lb Fins braid on Shimano Thunnus 4000 to land it. A little short of details on this one but nothing a couple of pictures will not describe better than a thousand words.Welcome to OMBC Peter! 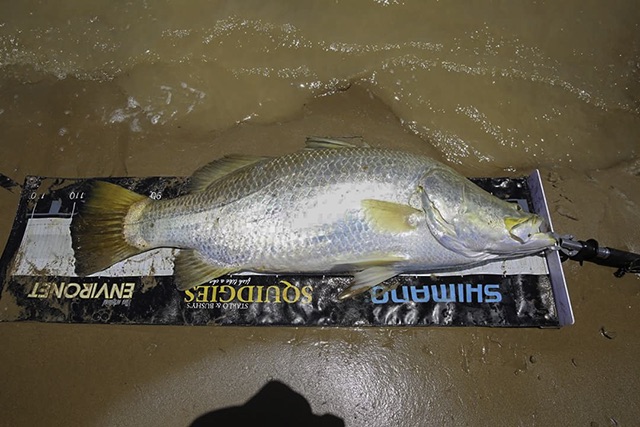 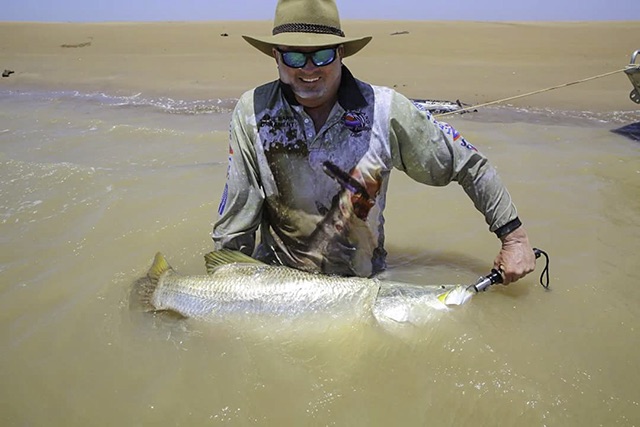 We would like to welcome Anthony Hutchison to One Metre Barra Club with his 102cm fish from the Mary River. He was fishing with guide Justin Turk of I’ll Take Ya Fishing Charters . Thanks to Sam Wagner for submitting Hutchy’s fish to OMBC. A Reidy’s lure was the undoing of this fish and you can see the tackle at the link above to the charter operator.  To write it in Anthony’s words “Justin from I ‘ll take ya fishing charters was very professional. I was elated to catch the barra, looking forward to going out with Justin again.”. Good work Anthony and again welcome to One Metre Barra Club. 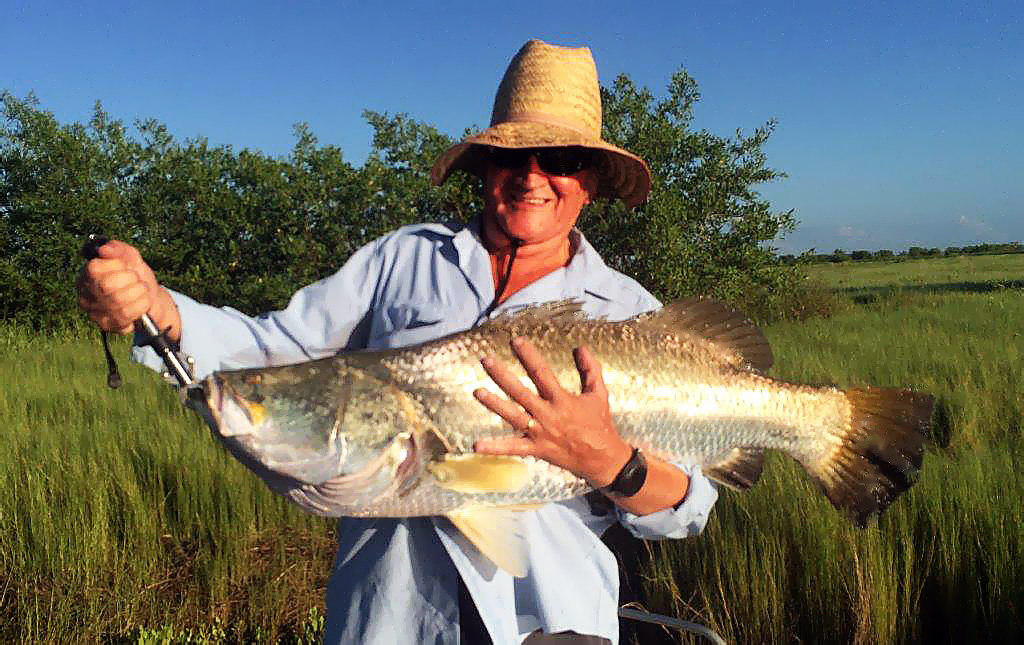 We would like to welcome Noel Urane  to OMBC. Noel was fishing the Mary River in the NT when he caught this 106 cm silver beauty. The fishing trip organized by Fish The Top End was just the ticket for Noel to catch this fish with Ben his guide.  The only thing we know about the tackle was that he caught it with a Squidgie lure. Noel has been entered  to One Metre Barra Club by his wife Lyndy as a surprise. He is lucky in life in more ways than one!  Again we welcome Noel to OMBC and thank Lyndy for entering this deserving catch.

We would like to welcome Leonard Eichmann to One Metre Barra Club with this 115cm Barramundi from the Calliope River in Gladstone. Leonard caught this fish while he was in Gladstone for a week of work. Leonard told us he used a live mullet for bait and when she hooked up fought hard with plenty of tail walking whilst running him up and down the river. It took about ten or so minutes before she gave up and was landed. For the gear junkies he was using Shimano Mexican Fire Rod 5-10kg, Shimano Elf 5000 reel loaded with 22 pound braid and a 40lb fluro leader at the business end. Leonard proudly reports that this beautiful girl was released after the pictures were taken. Let me quote Leonard here “It was the best week away working I have ever had”. I think that speaks volumes. Congratulations mate and again welcome to OMBC. 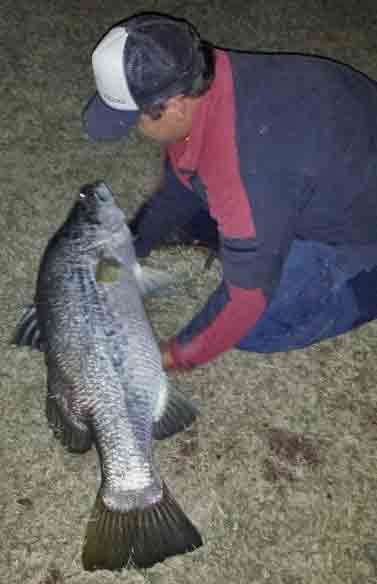